Last month our friends InteractiveSQUASH announced an eSquash league, an innovation – once again, the company has brought another interesting innovation for the sport – but how will this translate in the real-time Squash? 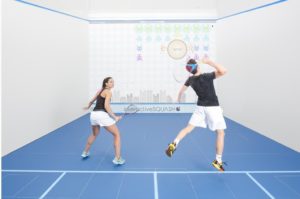 Well, the esports industry is rapidly becoming big business lately with various sports leagues; the most notable one is Formula 1 – with players racing for prize fund of $500,000. Now put that into a Squash context, it will be hard to imagine what the prize fund is going to be – we could be talk thousands.

However, this latest innovation by InteractiveSQUASH could see more people taking to the Squash courts but in the context of becoming a real time player after progressing from a virtual player..

With eSQUASH” concept it is a new mixed reality sports experience combining real sports and digital gaming to provide lots of fun and action for all ages in a worldwide league system.

For any budding Squash players – regardless of playing ability, the esquash league will them along to gain a virtual experience of the sport, thus allowing the gain more action, more interactive and more competition with a lower entry barrier to start playing Squash.

It is said, the concept of Squash in a mixed reality league based on a real sport, not only build a growing demand for events and global and competition for any player to participate in, but can see the sport becoming more popular than ever.

Global events, US first and then Europe

To sum up, the eSquash league is a welcome addition to the game of Squash and another key major milestone development in this new decade century – as it is going help the sport continue to grow in popularity also appeal to people who have never played Squash too.

From a social prospective, it will bring people from across the world together, in addition it could wonders for in a fitness context – you could see eSquash becoming an activity that help people become active in social hubs, especially with the real-time play; let’s not forget Squash is the healthiest sport on the planet.

Even better, Squash pros could be getting in on the action with their own squads based on regional names or playing against one another – just for fun or some serious competition.