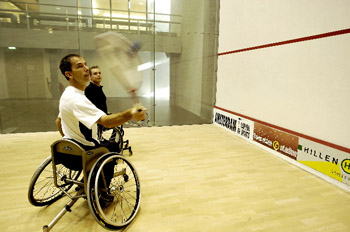 When you look at Squash as a sport, Paralympic Squash is one thing that’s not been mentioned in the media or in the case of making the sport accessible for all is one thing is not being considered when removing provision – in this case, wheelchair Squash is one that is overlooked by some many organisations, in terms of provision. 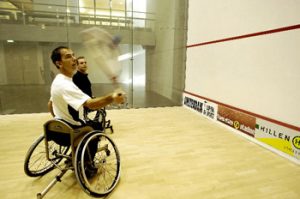 In the last few years of the recent Squash courts removals in commercial clubs/public sports centres, it seems that the management do not consider the voice of wheelchair members or those with special needs, who like Squash, thus will demand the best sporting inclusion provision in their local community.

Just like the fight to get Squash into the able-bodied Olympics, in last the few years there has been a strong lobbying by the Squash faithful to get the sport included in the Paralympic Games.

In 2015, the International Paralympic Committee (IPC) made the World Squash Federation (WSF) as one of its Recognised International Federations. Now for Squash fans, this gave a strong hope that the sport is one-step from full Olympic inclusion.

Furthermore, it can drive participation of Squash in the local communities looking to develop programmes for people with disabilities to take part, in terms of funding and marketing too.

The tale of a Squash Club in Wales

Throughout the England and Wales, there are some great Wheelchair Squash opportunities; however, one of the most intriguing is the Rhiwbina Squash Club in Wales.

Located in the north of Cardiff, this family oriented club has been making a considerable contribution to providing inclusive opportunities for wheelchair users who love to play Squash, alongside mainstream sessions and coaching provision alongside other able-bodied players.

Now with the programme at the Rhiwbina Squash Club, Conception Bay South Recreation Complex, a squash facility in Canada, launched an ‘inclusive squash’ programme aimed not only people with disabilities but also those with special needs.

Now with this programme it could be a global first, and be the catalyst to help Squash get Paralympic inclusion; as the facility has already made strides in attracting players.

Let’s keep Squash courts for people of all abilities

In conclusion, let’s hope that Squash keeps up the momentum as it did in 2018; however, the voice of wheelchair Squash players will add to the case to keep more courts open at the respective venues.

Furthermore, as we await the decision on whether Squash will get inclusion into the Olympic Games – let us hope the Paralympic committee see that Squash has value and the benefits of being a great Paralympic sport for the greatest sporting tournament on the planet.