There are some important lessons learnt from the World Squash Day 2017; mainly it is an event held every October, in which squash clubs across the world come together to promote the sport to drive participation. 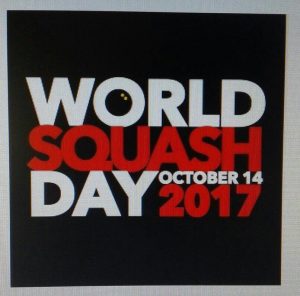 Not only does the event promote Squash, but the sport does its bit for charitable causes, either local or world based; either way it’s a great of bringing Squash world together.

However, this year’s World Squash Day has significant meaning, with two milestone developments, notably the showcase event at the 2018 Youth Olympics and the well-publicised campaign to include Squash in the Olympics.

These types of developments show how a global squash community can bring change through social media, aligned with celebrity and political support illustrates the sport is very popular.

Even though, we have no events planned, but we acknowledge our friends who opened their squash facility to the local community to celebrate the day.

The origins of World Squash Day

Like most key days, there is always a story – in this case, Alan Thatcher, a strong squash advocate, a tournament organiser and author, created the day to help grow awareness and encourage squash participation globally of the sport in 2002. He is a very vocal campaigning to put the Squash to the forefront of the sporting landscape.

Even world and national Squash bodies, notably the World Squash Federation, the PSA, and England Squash lend their support for the initiative to encourage Squash clubs across the world to open their doors on this special day to promote the sport in the local community.

The 2017 World Squash Day saw a campaign to develop new squash courts in the town of Corby, Northamptonshire.

Now in our mission to raise awareness of Squash developments across the UK and aboard, notably court closures – but it was shocking to hear that a large town like Corby has no squash courts!

A local squash enthusiast and coach choose hold free Squash taster sessions for both adults and children on World Squash Day to encourage local residents to support a bid to develop more accessible squash amenities in the town, as a way to encourage Corby to reap the health benefits and social enjoyment through squash. As a result, the campaign received backing from a local MP.

Could 2018 be the more reason to Squash to cheer? Hopefully, YES, especially with the Youth Olympics Games showcase in Argentina.

The year is almost over, thus plans to put on an event to celebrate World Squash Day 2018 are already in motion with our partners, – we promise this is going to the greatest show on the earth to promote the sport locally.

Overall, World Squash Day is a great day to raise awareness of the sport to new audiences, highlight the grassroots initiatives of the sport in the local community, and raise money for a local charity using sport as a tool to bring people together.