Just a month into 2019, alongside the British Junior Open Squash Championships, there have been five interesting stories in the world of Squash that have caught our attention in January.

2018 was a great year for Squash with exciting milestones, notably the presence at the Youth Olympic Games.

Nevertheless, Squash kicked off 2019 with key developments across the globe:

1. Rohan Arya Gondi, a champion in the making: 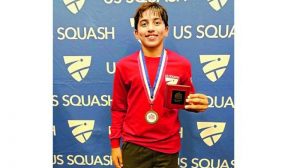 Young Rohan of Indian wins US Junior Squash Open championship U13 category of the tournament. Having shown interest in the sport from 4 years old, his success could be the catalyst to making the sport popular in India. Click here for the story.

Having won Squash success in the junior categories Ramit Tandon of India caused a major surprise by defeating Joshua Masters of England in 3 straight games to enter the second round of the USD 70,000 CCI International JSW Indian Squash Circuit. It shows the older you get, your playing skills never fade. Click here for the story.

Any Squash news in the Caribbean always brings a cheer to us, especially when it is a new development in boosting participation of the sport at a grassroots level. Click here for the story.

4. Lagos focus on grassroots to develop the next generation of Squash players:

Following the success of the Lagos International Squash tournament, it seems that Nigeria is looking to capitalise on the success and invest more in grassroots initiatives of the sport to become an emerging force. Click here for full story.

Mark Walter, the CEO of Guggenheim Partners, a global financial services firm, has agreed to sponsor the first world squash tournament in the windy city. This Professional Squash Association sanctioned tournament starts on Feb. 23 through to March 2 at multiple venues in the city, including Union Station’s Great Hall and the University Club of Chicago. Click here for the story.

Great start to 2019 for Squash

With these news stories, which made headlines in their respective countries, show that thus Squash is on the way to becoming a great sport and emerging as one of diversified the sport, aligned with growth in the grassroots development initiatives.

Overall, the news of Squash being a part of the Canadian Winter Games is quite unique as the tournament is held every two years and shows how the sport has evolved. In addition, the news of a Squash court revival – shame there was none in the UK to report.

In conclusion, there will be many great stories on Squash that will headlines in 2019, resulting a boost in popularity and participation