Towards the end of October saw the continued return Squash with major national junior tournaments taking place, since the pandemic put all high profile global youth tournaments on hold.

The pandemic had a major impact on junior Squash in terms of ensuring the safety and wellbeing of young Squash stars, in terms of travelling to tournaments and allowing those with serious potential to becoming a serious talent to compete after a year & half of not being to compete and could progress onto the senior ranks.

With World Squash Day 2021 taking place earlier in the month, which a major success – the momentum continued on and it was good to see grassroots participation amongst the next generation of Squash professionals taking part in national tournaments in countries with a strong following of our sport.

Putting on national junior squash events are crucial for grassroots participation of sport as a means to promote the sport to young people in the local community.

The few tournament that have seen potential Squash champions do well in juniors nationals were in South America, England and France:

Oddly enough before World Squash Day, Columbia played host to South America Junior Squash championships in September.
Held in Cartagena, Colombia, the tournament featured 137 of the best young athletes from 10 South American countries and had an attendance of over 250 spectators. 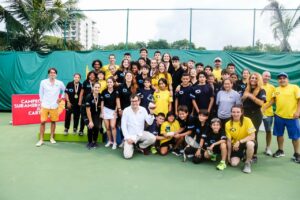 Another good outcome from the tournament there was no recorded positive cases of COVID-19 connected to the event.

As we, all know Squash is extremely popular in the UK, thus it great to see the AJ Bell English Junior Championships 2021, one of the major junior tournaments taking place in Nottingham.

The tournament was open to English nationals, just like the CASA held in the Caribbean major UK town & city bragging rights were going to at stake as which city has the best local Squash player. 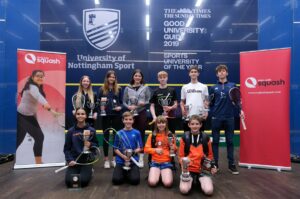 Well, honours were shared amongst the southern and northern parts of England – Jonah Bryant (Sussex), Alexander Broadbridge (Hants), Torrie Malik (Surrey) and Amelie Howarth (Isle of Wight) to name a few – while some were claiming their first EJC title, including Boys U19 winner Finnlay Withington (Macclesfield) and Ahmed Eldaly winning his first U11 title.

Well done to all those who took part.

France unveil their next generation of Squash stars 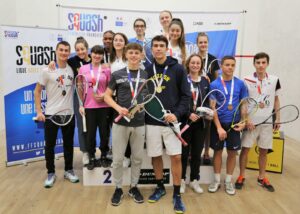 The event finished on Sunday afternoon in Lille, in the clubs of WAM (Wambréchies) and Arbonnoise (Villeneuve-d’Ascq).

France is another country with considerable strong Squash legacy, and last month Grégory Gaultier one of their major stars of the sport announced his retirement following a successful career that saw him win 44 titles including US Open (3x), British Open (3x) Qatar Classic and Tournament of Champions (1x).

One of the highlights of the tournament was the under-19 premier category, in which the title went to Brice Nicolas and Kara Lincou, who stopped the Lauren Baltayan tornado in the final.

Winners from the other categories were Melvil Scianimanico, Lilou Brévard-Belliot, Edwin Clain and Léa Barbeau, who in won the in 17 and 23 years categories.

There no doubt either one of players could become the next major French global star on professional Squash circuit.

In a blog, we did on junior Squash post pandemic it seems that keeping the interest of grassroots Squash is going need a serious push to raise the profile – especially in access to courts and opportunities.

Obviously junior Squash tournaments are playing its part but Squash needs to more accessible and less removal of provision at commercial venues.

David Lloyd Leisure Southampton removed their Squash courts last month, this news has caused a serious issue for the members who enjoy playing at the venue – either way the venue could see a dent in their profits in terms of revenue from local club tournaments and much more.

This clear sign that Squash needs to become an outdoor activity in order to save the sport and adapt to the changes in participation needs of players.

Well, we as a Squash community need to collaborate to keep the sport relevant especially in lead up to the 2022 Commonwealth Games in Birmingham and build a legacy as result for the next generation.