There has a lot of talk about Padel, another one of Squash’s other racquet cousins – but when it comes down which is one better, well it is difficult to decide, but they have many differences. 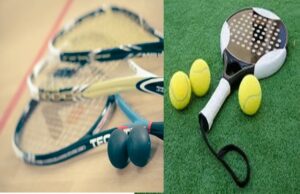 With Padel is designed to keep you fit, in comparison Squash is a game that is played with friends and family, in addition with fellow enthusiasts in club level tournaments sanctioned by governing bodies and club directors.

In a recent article by Squash Mad, highlighted that Padel is becoming popular than Squash as its played outdoors, plus could be a threat to Squash provision at venues in the US.

Nevertheless, what are major differences between Squash and Padel? Just like a distant relative, there is some things that people will need to know about Squash’s other cousin.

The origins of Squash date back to the 18th century, when it was played on an enclosed court and in Harrow; however no one knows who invented this sport—it is believed that two British officers were responsible for creating it.

Strangely with Padel, it was invented in the early 20th century in Mexico by Enrique Corcuera in 1969 and only made its competitive debut at the 1992 Barcelona Olympics.

Even though it still relatively new game and became officially recognized by Spain’s Federación Española de Deportes de Pádel (FEDEPADEL) in 2007 and has spread rapidly from there.

It is said both games have their origins in England: British Army officers stationed in India during colonial times invented squash; Spaniards who were not professional athletes or squash players themselves developed padel independently.

Needless to say both Squash and Padel have the same DNA when it comes racquet sports.

Played with racquets and balls

In both sports, the players use racquets and balls. The rules of each game are very similar, but here is a list of important differences:

Padel is played with a tennis racquet, not a squash racquet, and the ball is bigger than a tennis ball but smaller than a squash ball. The padel racquet is shorter than its squash counterpart is, as it has to accommodate for the larger ball. 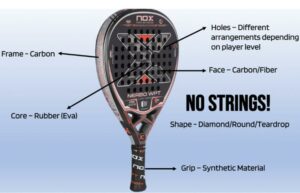 Image credit: Everything about padel

This also means that you will be doing less running around when playing padel compared to squash since you will not need to lean down as much when hitting the ball over the net!

A padel ball is larger than a tennis ball but smaller than a squash ball, which makes for faster rallies.

Courts are different sizes and shapes

When you look at the size of both a Padel and a Squash courts, well there are differences:

Just like Squash, Padel is also played in doubles and can be played as singles with backboard attached to the rear wall. The padel racquet has a bigger head than a tennis racquet but smaller than a squash racquet, so it is easier to play with an underslung grip. 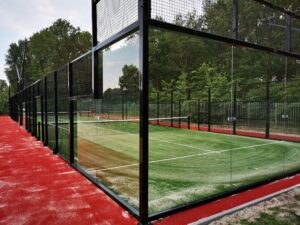 Another difference is that in Padel, the ball has to hit the front wall first before bouncing twice on the floor. This means players have more time to prepare for their next shot. The ball used in Padel is bigger than a tennis ball but smaller than a squash ball and can bounce above its outline without landing beyond the short line at the back of the court.

In squash, players must hit the ball against the front wall in such a way that it does not bounce above its outline without landing beyond the short line at the back of the court. The racquets are shorter than those used in tennis and there is no net to serve over.

The game is played on a smaller court with a smaller ball, which makes for quicker rallies compared to tennis. Squash also allows players to hit anywhere on their side of centre line (a diagonal painted stripe) without penalty; thus many shots can be ‘short-hopped’ back so as not to bounce higher than allowed — an approach familiar from baseball!

Many people love playing squash and padel in their free time. They are both relatively fast-paced racquet sports, with the main difference being that in squash you use a smaller ball and play on a smaller court. The rules are also different, with squash being tactical and requiring more strategy than padel (which is much closer to tennis).

Padel has become increasingly popular over the last few decades due to its accessibility—you don’t need much equipment to play it—and popularity among celebrities like David Beckham who have helped raise awareness of this sport around the world.

Squash has also seen an increase in attention over recent years thanks largely to British players dominating international competitions like Wimbledon; their dominance has inspired many more young people to try out these games for themselves!

Hopefully once outdoor Squash provision grows, it will showcase how great the sport is and be on the same level or even be more popular than Tennis and give Padel some serious competition in outdoor racquet sports!

To sum up, there are some major differences between squash and padel, either way both sports are becoming more popular than badminton and tennis – hopefully soon all four will feature in the Olympic Games.