The number of Squash clubs that are either run by volunteers or a management committee is quite high, thus these are good for the grassroots development of the sport – however, it was a shock to hear that a high-end health and racquets club operator announced plans to remove their Squash courts at one of their clubs to make way for a new exercise fad. 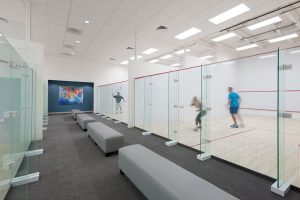 Compared to the removal of Squash courts at Bath Sports & Leisure Centre, this renowned health and racquet club operator are well known for being the first ever health and racquets club in the UK to house all 3 racquets facilities– in fact, this high-brand has over 100 fantastic Squash courts across the UK clubs. This brings one question why is this company divesting the world’s healthiest sport – should not they look about capitalising on Squash?

Back in the 1980s, there was strong growth with health clubs with Squash courts as a result of the popularity of the sport plus access to the squash courts – oddly enough, there were squash clubs with no more than 10 squash courts – if they removed one or two, it did not matter as their members were to play.

Our friends at Sprintz Leisure were the first ever squash club in Walsall, West Midlands with no more than 6 courts.

Meanwhile, down in London, there was one true Squash club visionary, who set about creating his own chain of health & squash clubs – Harm Tegelaars, who was a sales manager for a clothing company and went on to develop the Metropolitan Club, which later became the Cannons Group.

The Coral Leisure Group used to operate a commercial squash division, headed up by England Squash professional player and qualified accountant John Treharne; who then later founded the Dragons Health Club, in 1991 – from his clubs had competition standard Squash courts.

Towards the end of the ’90s saw a drop in the number of health clubs with squash courts, some removed the courts altogether, whereas others decided just to reduce the number to two or more squash courts at their clubs.

Dip in popularity leads to reduction in courts

In the 2000s, following the reduction of Squash courts, there very few leading high-end health club operators with either Squash courts or a combination of Tennis, Badminton, and Squash is as follows:

In terms of standalone clubs and ones with the England Squash Gold accreditation, the most notable ones are:

Having visited these venues, they can certainly give the likes of David Lloyd Leisure some serious competition, in terms of customer care and management control – in other words, no risk of reducing Squash provision to make way for other amenities.

For instance, the Southbank Club is the finest squash in South West London and one of the oldest, plus still has outstanding courts of a championship standard.

To sum up, given the news of this renowned health & sports club, the operator’s decision to remove their entire Squash facility doesn’t look for their public image, especially if their core racquet is Tennis provision.

Hence, there will be a debate between Squash v Tennis – which one is better (no guesses who has produced the most world champions in the last 15 years); the former has more kudos in terms of success but just needs an extra push to out do its racquet brother.

In a nutshell, it is time for England Squash along with the Professional Squash Association to forge more links with the private standalone Squash clubs – not just the private ones with revenue of £ 5 million or more to produce the next generation of Squash players.