Competitive squash returned back to the Caribbean on 10th July in form of the 2022 edition of the Caribbean Area Squash Association (CASA) Junior championship tournament. 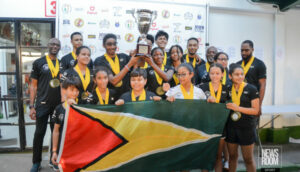 Having been postponed due to COVID-19 and no tournament in 2021; the 2022 tournament finally got off the ground and was scheduled to be hosted by (St. Vincent and the Grenadines, but due to some issues; Guyana step in to host the tournament.

Going into the tournament, Team Guyana were looking to avenge their loss to Barbados by winning another title in the juniors and this time make history.

For the Guyanese junior Squash team, the tournament was important as it was home soil, and most important the country was looking to make history as the most successful junior squash team in the Caribbean.

Fortunately, they did this and began the tournament by winning three gold medals compliments of young talents Wiltshire, Verwey, and Avery Arjoon, and Guyana finished with 12 medals, seven more than second-place Trinidad and Tobago.

Ironically, the tournament for important for the boy’s team who were looking to win the team titles – nevertheless the girl’s team won their category for the first time since 2014.

Girls Under-19 silver medallist, Kirsten Gomes, won 11-7, 11-4, 7-11, 14-12 against Mia Todd, even though her compatriots Ryle Rodrigues and Samirah Sumner lost their matches, it was down to Cadogan to deliver, and she did.

This result was good for the Jamaican Squash, as the pandemic caused them some serious development issues, thus the success will inspire grassroots developments to continue training young talent.

With just a week and a bit to go to the 2022 Commonwealth Games in Birmingham, each country in the Caribbean will be watching the Squash competition with great interest, especially the senior players who have not participated in a serious competitive tournament since 2019.

Hence, performing well in front of UK-based decedents from Jamaica, Guyana Trinidad & Tobago or Barbados is going to be important for the likes of– even if they make it to the quarter-final.

Personally, any of these Caribbean nations taking part in squash competition of 2022 Commonwealth Games in Birmingham is good for showcasing to decedents of these countries based in the UK.

As a company we were happy to see the CASA Junior Squash championship take place in Guyana, as it was a chance for the nations to promote the sport to their peers across the globe – especially in the UK.

So what does this mean for Squash in Guyana? Well, the Guyanese Squash Association will have a lot of momentum when taking part in other junior tournaments come 2022/23 – there is no doubt the junior team will be looking to take part in a global tournament soon.

Overall, tournaments like CASA showcase how Squash is a world-class sport and most importantly young people have a chance to take part in another sport besides the nation’s other favourite sports.

Yes, once again Guyana won the overall title but they worked hard for it and the other nations have done well.

To sum up, well done to Guyana and Jamaica on winning gold – plus the other nations doing well also – each one has inspired young people once again that Squash is an excellent sport to participate in.

Let’s hope one day the nations will come together and form a West Indies Squash team that takes competes in a PSA-sanactioned Squash tournament.