With all the positive news that Squash has been receiving in the last few years, it is not about time that the sport be made one of the key lessons of the PE syllabus.

In light of Squash provision being reduced to make way for other sports or other amenities, by making Squash a part of school sports can have a significant impact on the sport in terms of making sure provision is available for children outside of school. 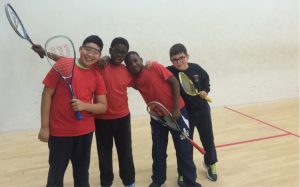 Compared to other sports – notably football, rugby, and basketball – Squash is not heavily featured or taught to schoolchildren in PE lessons – why? Maybe it is due to the lack of Squash coaches or PE teachers are biased towards the sport.

Empowering the minority to play

As someone, who grew up in the 80’s and 90’s, my PE lessons consisted of activities such as running, football and the odd game of badminton. However, if Squash was an available it would have made a greater impact to my peers, as well as influenced more young people from ethic background to play Squash instead of basketball – oddly enough only a few have gone to be successful in that sport.

One cost effective solution, to combat this is opportunities to watch Squash – even if it junior or secondary education. Studies have shown children are more likely to take up sports if seen in action, especially if the competitors are similar background.

Looking in areas, where Squash is immensely popular, especially in London and West Midlands, it is evident there are very few opportunities for young people from neighbourhoods that are considered deprived to play Squash.

On the other side, in the area where it is very middle-class there are Squash schemes for those with money – in other words privately owned member clubs. This evident when Squash courts at Bath Leisure Centre, were removed in 2016.

More recently another leisure centre, Polkyth Leisure Centre in Cornwall – which owned by a local authority, but managed by Greenwich Leisure Limited – decided to remove the Squash courts to extend the existing fitness suite; this brings about a question is Squash becoming a sport of the rich?

So by making Squash apart of an after school activity, on school grounds could be a game-changer in terms of tackling inclusion in deprived communities.

Recently, experts that by 2021, that there will be a high number of children who will be obese – hence why not teach children how to play squash to reduce obesity; let’s not forget squash was voted the most healthiest sport to lose weight.

To conclude, given the recent Squash accomplishment in the UK and even those aboard, aligned with Nick Matthew plans to retire at the 2017/18 Squash season, would not be good see the next generation of squash players come from playing at school and go on to play in the professional ranks? Answer – YES! This happened in basketball and football.

It would great to see squash as a mandatory lesson on the PE syllabus or even better PE teachers deliver lessons in Squash. Furthermore, it would enforce Sport England to encourage more participation in the sports and ensure leisure centre companies to keep squash courts at the local authority leisure centres.