As we eagerly wait for the news on whether Squash is to be an official Olympic sport – little do people know about Squash’s association with the Pan-American Games – a summer event with Olympic structure and held in different parts of America.

Just like the CASA Senior Championships, there is strong competition amongst the Pan-American continents play in a bragging match of who is the best at Squash in Pan-America. In the last 22 years, the following participating nations at the Squash event have been:

The most successful country at the Pan American Olympics is Canada with medal haul of 36 medals (13x Gold), next up is the USA with 22 medals (6x Gold); after these main two squash superpowers – Mexico is the most successful South American squash playing nation.

Check out the video below of the 2015 Pan American Games Squash semi-finals in Toronto (credit Ulrezaj):

Meanwhile, from the Caribbean – Guyana is the only West Indian country to date, that has won a medal at the games. This honour was achieved by their former No.1 player Nicolette Fernandes winning a Bronze medal at the 2011 Pan-American Games, in Guadalajara, where she beat Theisa Serafini of Brazil to reach the semi-finals. Since then, this feat has not repeated – but there are signs that Guyana will do this again as their junior squash team are doing well.

Competition format at the Games

The competition consists of six events will be contested (three each for men and women) in singles, double and team matches, from which individuals and teams are crowned champion of the Games. 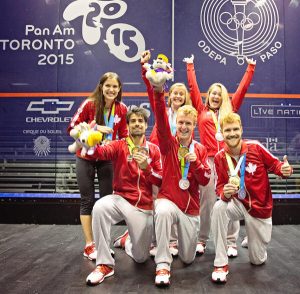 Raising the profile of Squash in Pan-America

To conclude the Pan American Games are the most interesting events in Squash is a part of and the sport has shown to have a great profile in Pan-American from which gives Squash its global appeal with squash players from around North and South America countries playing in tournaments in Europe and Asia.

With news that the US city of Los Angeles is hosting the 2028 Olympics Games and Para Olympic Games, this is a positive for the US, as the country has a strong Squash fan base and given the accolades of the Pan American Games – there is no doubt that the US will be looking to capitalise on home turf.