Home » Our Blog » Community Sports » The Best of Squash (So far)

In our on-going mission to bring squash to the forefront of sporting culture, we look at the best of Squash (so far) in 2017, which could help boost participation and inspire the next generation of squash players.

If you are a die-hard Squash fan, you would know about these – but if you are not, and so it is down to poor media reporting; even so, as a grassroots development initiative to find young people playing squash it is our obligation to fetch you this news. We have unearthed some interesting squash developments from around the world that will produce a difference in the on-going revival of squash: 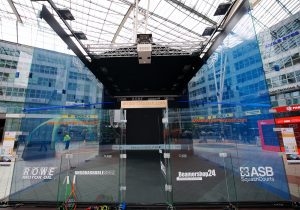 Our friends at Interactive Squash have come up with a new means of playing Squash – at an airport. Complete with an outdoor Squash court, located outside Munich Airport, aligned with the Interactive Squash software; passengers can play AirportSQUASH. The project is part of an initiative that aims to bring the sport to highly frequented public places such as airports.

You may ask where is Daventry? Well, this interesting part of England is in Northamptonshire. The local squash club hosted a Squash festival inviting children six local schools with 10 children try out squash, taking part in games and learning about agility. The Northants Squash Rackets Association and Northamptonshire Sport collaborated on this event, to boost junior squash participation in the region. Read more in the Daventry Express. 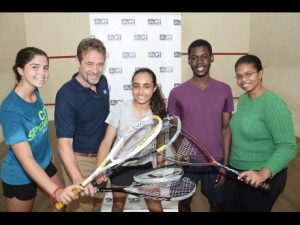 Now this may not be major news to some, but we are always delighted to learn that the latest development with Squash in Jamaica as the nation is becoming an emerging powerhouse in Squash. The JNGI is an insurance company and their sponsorship is a welcome boost for junior squash players in Jamaica.

In advent of budget fitness clubs, boutique hotels and five-a-side football centres, the US has come up with an alternative – Squash on Fire, is an excellent squash facility with a high-end specification courts. Located in Washington, DC – the facility owns a squad of committed coaches to help any squash players, novice, or experienced get the most out of their game. 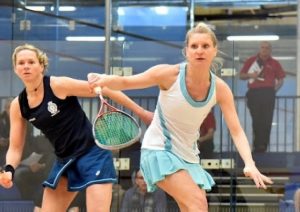 Laura Massora is the No.1 of English Ladies squash player on the world stage – even so, there is one female Squash master, who also created headlines in February; her name Keeley Johnson, a mother of two. Already she has won three England Squash Masters tournaments and competed for England in the British Open aged 40. Her participation has served an inspiration to her daughters to carry up the play.

Now these stories will serve as a catalyst to any Squash enthusiast looking to play squash or parents looking to introduce their children to the sport.

Most importantly, it shows the global reach of the sport and it is a shame there is no dedicated squash programme to highlight these developments.

From all of these stories, the two that were the most intriguing were AirportSQUASH and Keeley Johnson. With AirportSQUASH, could you imagine playing squash before a departing for a business trip or alternatively this kind of initiative would be a great feature at Gatwick or Heathrow airport.

However, with Keeley Johnson representing England at the British Squash Open – now there is no connection between her and us – nevertheless she is a great role model to up and coming female squash talent and will serve as an inspiration to people take up Squash.