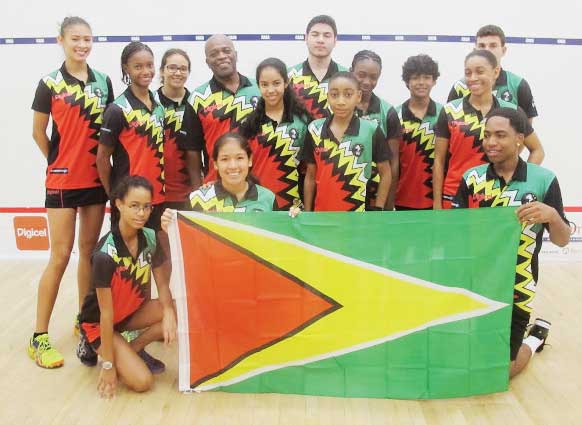 Following their loss to their arch-rivals – Barbados in the final of the 2017 CASA Junior Squash Championship, we ask what is next for Squash in Guyana.

Towards the end of June, the islands in the Caribbean came together, to compete part in the CASA Junior Championships and as reigning CASA Junior Champions Guyana were going for a record-breaking 13th Junior CASA title, but lost out to Barbados. Despite their loss, Guyana is still one of the most successful junior squash teams in the Caribbean team with more titles than Barbados and Jamaica combined.

Despite this loss, how is Squash participation in Guyana to grow further? Well, it is going to be mainly down to their grassroots squash development initiative – the country is one of the leading junior squash teams in the Caribbean.

What has been the driver to their success?

Well it is down to the Guyana Squash Association’s outreach programme to introduce squash to young people. Like England Squash and even the Jamaican Squash Association, Guyana has been strong on promoting squash within schools and even highlighting the squash in their sports tourism campaigns. So far, the scheme is attracting many young people to take up Squash.

Oddly enough, it was under the coaching tutelage of Carl Ince, Elite Level 4 Squash Coach – a British citizen – and his team, who has been one of the key drivers of the junior squash team in which they have won 12 CASA Junior titles.

Up until her retirement last month, Nicolette Fernandes (below) – was the leading female and no.1 player of Guyanese Squash. In her career, that has spanned 14 years with numerous accomplishments in Quadrennial sporting events – notably a gold medal in the 2006 2006 Central American and Caribbean Games; Guyana is now looking to the next generation of female players to participate in the professional squash circuit and join other female squash players on the world stage.

After her, the other senior players are gradually making themselves known in the professional squash world ranking of Squash – hence look out for Sunny Seth, Mary Fung-A-Fat and Alexander Arjoon are well in the top 500 of the Professional Squash Association rankings and have shown signs of breaking the top 100 in the next few years.

However, in our professional opinion their junior squash stars; Taylor Fernandes, Alexander Cheeks, Rebecca Lowe and Shomari Wiltshire, of all have represented the country in the US and Canada Junior Open tournaments – are going to be the next generation who going play at a senior player level and really raise the Guyanese flag at world tournaments.

On the face of it, it is hard to say as each country has seen one of their junior squash players go on to play at a senior level in the last 25 years – with at least 3 players in the Professional Squash Association world rankings.

However, if it were down to junior squash competition, a betting man would say Guyana – mainly as they have won more CASA Junior titles than any other Caribbean island, since the junior category was introduced in 1981, as well as winning three senior CASA titles – with more coaches they could easily win more.

Should these three join forces to form a West Indies Squash Team and play in a Squash World Cup tournament; they would easily dominate like the West Indies Cricket team.