Squash is not only an individual sport like its racquets cousins Tennis and Badminton – it can be played in a doubles capacity but on a larger court.

With all the publicity of individual Squash, Doubles Squash does not get the same media attention despite being around the same time as the individual version of the sport.

Just like individual Squash, Doubles Squash can be in same gender and mixed capacity. 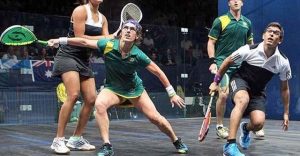 Long before the great state of Philadelphia became known as the city of brotherly love – Doubles Squash was introduced to Squash players in 1907, many years after Squash came about as the older game rackets in 1830.

However, it was not until the 1930s the sport got its professional status. Much later, governing bodies International Squash Doubles Association (ISDA) and the Women’s Double Squash Association was formed in the 21st Century.

Oddly enough, the US has more Doubles Squash domestic champions than any other country, including the UK and Egypt.

Global appeal across the continent

In terms, global appeal the US has more doubles Squash courts than any other country, including the UK and Egypt.

Even neighbours, Canada has a strong number of Doubles Squash courts and according participation data, there are now more than 4,000 players in Canada who play doubles regularly.

Barbados, one of the Caribbean’s leading Squash teams, is renowned competition success in Doubles Squash competition, have provision for Doubles Squash participation – this could explain how the country prepares its young players for major competition.

Other countries with Doubles Squash facilities include Malaysia, Myanmar, Scotland, Singapore and Thailand. In terms of title success, Australia is the most successful nation in Doubles Squash having recently achieved a clear sweep in the World Doubles Squash championships in Australia.

More collaboration with other governmental bodies

To sum up, for the doubles Squash to grow there needs to be more collaboration between the governing bodies in Squash as it can be the solution to keeping courts available at public and private clubs – given the dimensions but there can be changes in rules to adapt.

Overall, Doubles Squash would help Junior players learn how to work in the opposite gender in the sport too.