The Canary Wharf Squash Classic is one of the PSA’s prestigious events – however, this year will see England’s Squash no.1 Nick Matthew makes his last appearance in the tournament.

Unlike most PSA World Tour competition, this tournament is an invitational event and participants must take part in a qualifying competition at the Wimbledon Squash & Fitness Club, in South West London; a week before the tournament.

Squash and Business world come together 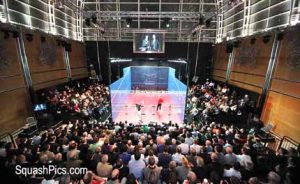 Established in 2004, the tournament was originally open to top eight leading world’s Squash players; by 2006, the tournament became a part of the PSA World Tour series, from which led to qualifying rounds and a main draw of 16 players.

Compared to the Tournament of Champions (TOC), which is played in New York’s Grand Central Terminal – the tournament takes place in East Wintergarden, the premier venue of the Canary Wharf. For Canary Wharf, as one of London’s foremost business districts, having Squash tournament there is one of the major events for the London Borough of Tower Hamlets. Oddly enough, the location is on the Jubilee Line – making it not very far from the London Stadium, home of the London 2012 Olympics and the O2 Arena, in North Greenwich.

Now for Squash fans, who are in the business of doing deals – the tournament would be ideal, of way of doing business with prospective clients – especially those in the financial services environment.

Unlike other Squash tournaments, the Canary Wharf Classic has been dominated by British players – Nick Matthew and James Willstrop; however, if you include John White of Scotland, you could say Great British have dominated this tournament.

Nick Matthew will be aiming for his sixth and final title of the tournament, as he is retiring at the end of 2017/18 season. Can he do it? Well he have to get past fellow Brit and domestic rival James Willstrop, in the Quarter final; who will be looking for his 5th title.

However, the winner of that game could face off against one of the Elshorbagy brothers from Egypt; let us not forget the country is on a roll having won the Men’s World Team Squash Championship, last December.

In conclusion, the Canary Wharf Classic has the makings of being one of London’s premier sports tournaments, but if they add women’s category it would appeal more to the younger generation; furthermore it would be great if the tournament were televised via free-to-air channel.

Overall, there should be a community aspect to the tournament and show that the sport is doing something to increase participation through community engagement.