On 30th July, the 2019 WSF World Junior Squash championships began, with over 20 nations taking part in the individuals and team’s championships – the 2019 tournament looks to be legendary with some nations looking to do well, notably England, Pakistan and hosts Malaysia. 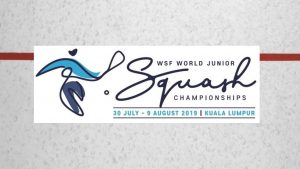 The official logo of the tournament (credit: the World Squash Federation)

In the past few months three Squash players from the senior ranks, have hung up their rackets, thus, each junior player in the U19 will have a chance to shine in the tournament and look to step up to the professional category.

Should the winner of U19 category do well, he or she could follow in the footsteps of Nicol David, who made her debut on the professional scene at the age of 17 – following the success of WSF titles in 1999 and 2000.

A feat that matched by Nour El Sherbini, who became World Junior Champion 2009 at 13 years old.

In light of the success and great history of the senior professionals in this tournament – we reckon there are some team who will be the focus and could make the 2019 tournament be a classic:

Will Pakistan forget their problems and cause an upset?

Following months of uncertainty about the Pakistani junior Squash Team, the country’s governing body has sorted out the issues surrounding their junior team participation and involvement in global tournament and the country will be represented at the tournament.

Can England deny Egypt another title?

England as a nation needs to show more support to Squash and get behind their team, as they have done in cricket and football. Nevertheless, in the context of Squash, the same would apply to their junior team.

Given the recent success of England in European Squash competition this year, there is no doubt that the momentum will continue and could see them in the final against Egypt, the current global Squash stars.

Who is Malaysia’s next Squash star

Malaysia has a rich history of Squash, given the success of Nicol David – however, the country is looking for a new star to take over her mantle of the Queen of Squash, or it could be a King of Squash – either way, it would be great the country produce another Squash like her.

Malaysia will do Squash proud

To sum up, Malaysia is going to put on a great junior tournament, mainly the popularity of the sport and the participants will make memories regardless of how well they do, mainly as the sport is on the revival train to becoming popular again.

In terms of television coverage, it will be shown on SquashTV for FREE – yes, no capitalist issue over TV coverage.

Overall, it would be good see other nations such as Kenya, Jamaica, and Barbados take part in future WSF World Junior Championships competition, as it gives the WSF Tier 1 more value in terms of global appeal.
Could you imagine if it happens in 2021? It would be good for the sport and help encourage more young from different nations to take up the sport.

Let’s see if history will be made at the 2019 World Junior Championships in Malaysia.