With Squash clubs being in lockdown, our founder discussed with the advisory board about seeking an opportunity in helping an overseas Squash operation – by a curious chance of fate, we came across the Kawambwa Squash Club in Luapula, Zambia.

The opportunity came about via one of our team being very active in a Squash Facebook Group – whatever you say negative about Facebook platform is a great tool for bringing sports enthusiasts, to collaborate on a business project. 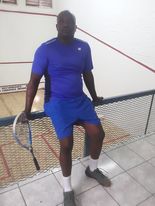 Agness (Manager) and Christopher Nkole (Head Squash Coach) are the team behind the Kawambwa Squash Club; both are highly experienced Squash players; together with them we are now helping them to develop a grassroots Squash initiative in the Luapula Province of Zambia, aligned promoting the sport to local community.

Finding the next generation

Founded in February 2020, the Kawambwa Squash Club has 12 budding junior players so far on their grassroots initiative, ranging from 8 to 11 years old, who are local and eager to play to Squash.

In terms of their competitive players, the Kawambwa Squash Club has a total number of 18 players who are going through extensive training to compete in local tournaments in Zambia.

On 16th January, the Kawambwa Squash Club took part in the Ndola Squash Invitational tournament, in the Copperbelt Province.
For the tournament, they entered their junior team, and we shared this news of this accomplish on our Facebook page and on the Squash group; that one of our team first made contact with Agness about a partnership.

Depending on how things ease down with the pandemic, we hope that more juniors from the Kawambwa Squash Club enter local and even regional junior tournaments, as we reckon it would be a great way to raise the profile of Squash in Luapula Province of Zambia.

Raising the flag of Zambia on international Squash circuit

Squash in Zambia is governed by the Zambia Squash Association, who co-ordinates and promotes in the sport.

Looking at Squash international representation from Zambia, the country has a glorious history of taking part in the prestigious Squash competitions such as the Commonwealth Games, Masters Series and the PSA World Series tournaments.

The current leading Squash player in Zambia is Kelvin Ndhlovu, (currently ranked of 191 in the world), his career spans 5 years. So far, he already has taken part in some a few Professional Squash Association men’s sanctioned tournaments.

Meanwhile, on the mixed Squash local doubles scene, Manda Chilambwe and Sharon Chimfwembe are leading Squash duo and took part in, and won the men’s and women’s categories of 2019 Midlands Open.

In fact, many predict Manda Chilambwe is as a future Squash champion – so look for her on the international Squash circuit soon!

Just like any other country, Zambia host many in many regional and national tournaments, in which local Squash players from across the

Zambian provinces take part in for a chance to launch their careers.

We see Zambia, as one of the emerging countries of Squash, just the like other African countries.

In 2012, Zambia Squash Association presidential candidate Norena Mutoya-Chiteba made a promise if elected to revamp the sport from the grassroots level.

Thankfully, she became the first female president of the governing body and so far, her vision of making grassroots Squash priority is working.

This was clear with the launch of Simply Squash Academy; led by Mayase Mibenge, a local Squash enthusiast. Her fantastic grassroots initiative delivers Squash training women of all backgrounds, with mentorship, education, and dialogue, with the dream of becoming a Squash professional.

With the Kawambwa Squash Club, it is our goal to make it one of Zambia’s leading junior Squash initiatives partners in revamping grassroots provision in the country and bringing the sport to the forefront of Zambian culture.

First of many partnerships

To sum up, by collaborating with Kawambwa Squash Club in helping grow the sport in the Luapula Province, is something that we feel honoured to be a part of as their values suit our community cohesion values.

We believe that this partnership is great way of building more awareness of Squash globally.

We are looking for collaborators based either Zambia or other countries, who can help this partnership achieve G.R.O.W.T.H, in the Luapula Province of Zambia.

To register an interest, visit our Partner with us page, and complete the form to discuss this great opportunity.

In return, we can bring about a collaborative advantage to Kawambwa Squash Club and  make you apart of their successes of their young players, across our social media platforms.