On 5th and 6th March 2021, will go in history of when the key Squash influencers, promoters, and administrators, of the sport came together in a global summit to discuss, in what can be described as a meeting of minds, to discuss and hear ways to shape the future of sport. 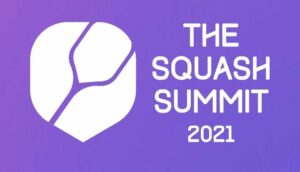 Our good friends Sportageous organised the online conference, and the first of its kind given the global pandemic.

For me, it was interesting to see how many attendees from across the world ever since our new international partnership in Zambia plus to be in the company of the major players in the sport too.

With over 100 attendees from around world tuning into the first inaugural global Squash Summit, I knew this was an event that I wanted to apart of and got woke up early on Friday morning to attend.

The emcee, otherwise known as the master of ceremonies was Kanzy El Defrawy, Squash former World no. 24 and the co-founder of Reachr, an influencer digital platform based in Dubai and operating internationally opened the proceedings.

Alex Gough, CEO of Professional Squash Association, was first up to speak about how covid-19 has impacted on Squash especially with travel restrictions and most importantly how the wellbeing of Squash players has seriously been effected in terms of loss of revenue and not being able play at their local venues. He finished with plans to how the sport is going make it more of an attractive proposition to ensure financial survival, especially with the new strategic partnership with Infront who main remit is improve commercial side of the sports.

Next up was current England No.1 and Women’s President at the PSA, Sarah-Jane Perry who delivered an excellent talk on Women’s Squash especially how it is important that young women need to have correct information in terms of health and wellbeing in order to progress into the levels of senior ranks. Sarah-Jane also went to talk about the prize money distribution amongst male and female players – something that been talked about a lot in the sport but thanks to lobbying it has been made possible.

Without sounding to cynic or that person who says, “I told you so Squash outdoor is great for accessibility for people to participate in the sport” – Carlos delivered a great discussion how a Squash legend first learnt how to play the sport outdoors with no roof and just walls.

Carlos and his team are developing a chain of outdoor Squash courts in native Ecuador. As former Squash professional, Carlos knows how difficult it is for young people to take up Squash – nevertheless, what resonated with me is how it costs to build an outdoor venue – just under £10k

To sum-up the first half of Day one the summit, all the speakers brought up key points, however concepts like outdoor Squash and more information for young women about playing Squash past grassroots are vital in terms of making the sport accessible and attractive for people to take up.

As I have said before and noticed in other blogs talking outdoor Squash, it seems now that it is going to an essential way in the new normal post covid-19.

Hence, countries like England, perhaps one of the emerging nations and even Australia need to get on board with to ensure the survival of the sport and making it popular again to the masses with a key message of health and wellness.

Getting down to the business end of Squash

With my interest raised from the first session, I was looking forward to hearing from the speakers in session 2 whose topics related to business side of Squash.

First, up to talk Alan Thatcher, founder of World Squash Day and a new initiative Squash 200, plus fellow Kent resident.

This year marks the tenth anniversary of World Squash Day and is on 9th October 2021 – this gives me enough time to plan my one with a commercial partner.

However, I was pleased hear about his plans for Squash 200 – a plan to build more Squash courts by 2030. Having heard about high of venues that been closed or changed in fitness suites (cough, cough – most notable David Lloyd Leisure Gidea Park and Bath Leisure Centre); this needs to addressed with formal discussions with Squash players, for sport to survive in countries in which the sport was popular.

If you are wondering about the significance 200 and the year 2030, well come the latter is the 200th anniversary of Squash.

Alan spoke about how Squash needs to make public instead of out of view from the public – in other words more visible to members or users of leisure clubs.

When it comes down to it finance is going vital, Alan announced he had formed a partnership with a major backer to make Squash 200 happen – thus the Squash club business model is going to change with a more affordable and social business model with strong emphasis on health.

I could not agree more and made me think of my days as Marketing Manager of Sprintz Health & Fitness Club, a venue that was visual with their Squash provision and its great social atmosphere.

Following on Alan’s talk, the founder of Simply Squash, Maya Mibenge, spoke about her initiative in Zambia to get more girls playing Squash with a topic called Don’t hold your punches, Hit like a Girl.

Given that our partnership in Zambia, it was intriguing to hear about Maya’s project as Squash in the country is starting to become popular again, nevertheless it is great about plans to help young women understand the sport through mentoring and coaching.
In all honesty, both Alan and Maya’s talks were insightful and show there is hope for Squash – to me both of them are illustrating collaboration is going to be important for the sport in the long-term.

For Day 2, I got up early and had a bottle of Lucozade to keep awake in order to hear the next speakers of the Squash Summit.

Once again, the emcee, Kanzy El Defrawy, she even talked about her Squash initiative and videos from the sponsors of the summit.

I admit it was humbling to hear about the We Are One Fund, a fundraising effort designed to help the players of the PSA Tour adversely affected by the global pandemic.
Zena Wooldridge, newly appointed President of the World Squash Federation (WSF) was the keynote speaker and she talked about plans to get the sport moving again starting at a senior level down to the grassroots level.

In her keynote speech she spoke about how the sport is going tackle lack of visibility and reducing the cost of building courts – the key takeaway from this is Squash wants to be more hip with Generation Z, this is something it already does but needs more exposure.

She addressed the issue Squash is a core sport and the federation is looking to get inclusion in World University Games, African Games and oddly enough the International School Games.

Once again, there was mention of the Olympic Games inclusion – oddly enough, the next Olympics are in countries of which Squash is starting to become popular again; let’s just say hopes for inclusion look promising.

Following Zena’s keynote talk, there was talk about the more current state of Squash in one of the major superpowers of the sport and the fundamental business side of the sport.

Robert Donaghue, CEO of Squash Australia spoke about the future of Squash in Australia, I found his talk insightful given that the country is one of major superpowers with a countless of successes with title. He spoke how popular of the sport has declined somewhat but it is working hard to bring it back with a number of initiatives to grow the game.

As a marketer, I admit when it comes to hearing from other marketers I am somewhat intrigued, but Maxim P. Weithers, Mental Coach, Squash Coach, and Marketer talk on Global marketing for Squash – using neuroscience/brain science; made me think about a lot in the way the marketing of sport using neuroscience methods.

I have heard a lot about neuroscience marketing, but when it comes to Squash, Maxim brought up a few things that promoters need to do make sport appealing to a mass audience.

I must admit the innovations embedding Squash and technology are going to key part of the new normal, in the context of adding fun to the game aligned with helping professional players improve the agility.

Hearing from Markos Aristides Kern, founder of InteractiveSquash, on how squash clubs can benefit from the tech shows a lot of promise for venues looking to think out of the box in terms of boosting membership retention.

Squash Levels, is another good way of building up a community of squash players in the context of strength in numbers of interest.

With Racketware, this is an extremely equipment for any causal squash player in terms monitoring their own personal development.

Overall, Squash has its future covered in terms of fun and enjoy with technology.

Coming away from the summit, I learnt there were a several things that the Onyx Squash Academy can help to make the sport an attractive product to potential participants or funders for any grassroots initiatives.

When I first pitched the Onyx Squash Academy to an associate, they told me I was out of my comfort zone – who is laughing now; this year my team and I have the partnership in Zambia and working hard with them to secure funding.

The Squash Summit brought it home to me that collaboration is going to vital in Squash.

With Squash 200, I am looking forward to how this develops especially as I want to find a London or one outside the Watford gap to develop more Squash provision for young people in that community.

I strongly believe Outdoor Squash it needs to happen across the world not just in countries with all year round summer – the UK has plenty of parks that could feature an outdoor provision.

To sum up, Squash is going to major force with the plans as mentioned in the Squash Summit – personally, I reckon all the attendees can work together to deliver on this promise show the IOC that the sport deserves to be in Olympic Games – come 2028 alongside its racquet cousins.