Squash returned with a bang after 6 month lockdown, because of COVID-19, with the PSA World Tour Finals in Manchester featuring the top 10 men’s and women’s players in a winner take all type of competition.

Despite not having a large audience in attendance, the tournament produced some of the greatest rallies and illustrated that the sport can be able to produce noble action in the new normal.

The new normal in Squash continued at a national level and within the venues with some fresh developments to ensure a safe return to play, to boost participation.

Egypt picks up where they left off 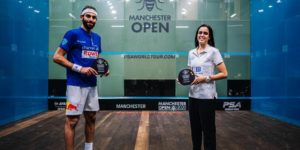 Both the men and women’s world no.1’s players of Squash, both Mohamed ElShorbagy and Nour El Tayeb of Egypt won the respective titles; with the former making history in becoming moving up records of fifth place on the all-time men’s PSA title winners list behind only Jansher Khan, Jahangir Khan, Mike Corren and Peter Nicol. As Nour, she won her 11th PSA World Tour title and her first since February.

Another historical significance of this tournament, each winner took home equal prize money in the sum of $11,000.

For both ElShorbagy and El Tayeb next up is the CIB PSA World Tour Finals, held at Cairo’s Mall of Arabia on Monday September 28 – Saturday October 1.

Despite many high-profile junior tournaments postponed until 2021, because of the travel restrictions established by national governments – the inaugural KP Junior Squash championship took place in Pakistan, at the new constructed Qamar Zaman Squash Complex in the premises of Peshawar Sports Complex.

The inaugural tournament featured both Under-11 and Under-13 categories for boys, with Deputy Director Sports Aziz Ullah Jan as the chief guest on this tournament.

Barbados unites than ever to boost participation

In Barbados, there country announced major changes and with a lot efforts behind the scenes with special thanks to those in the Squash administration of the country, despite the COVID-19 pandemic.

First, Kim Jebodhsingh, the President of the Barbados Squash Association; sang the efforts of the local association are making to ensure normality with the sport in the country with plans to boost the sport with changes in the sport’s administration.

With these appointments, it shows that the country is going make strides in boosting Squash participation, in addition sports tourism, with the hope one-day challenging the leading world performers in the sport – thus this would be good one day to see a World Squash champion from the Caribbean.

Because of the rises in cases of COVID-19, there were changes in how recreational players can play Squash at their respective venues.

In the past, we have said that a global Squash COVID-19 manifesto is needed to ensure fair opening of all venues in allowing both professional & recreational players the opportunity safely.

Well, it seems authorities heard our voice, with national Squash governing bodies introducing additional measures to ensure all the stakeholders in Squash can play and work safely at venues; thus preventing the spread and infection.

Let’s not forget Switzerland were the first country to reopen their Squash venues post-serious rise of the pandemic, thus other countries bucked up and sort to make changes post heist.

When the UK government announced fresh changes in social distancing guidelines because of a rise in COVID-19 case, England Squash made sure they introduced new guidelines for all squash clubs to adhere to ensure members can play the sport in a social bubble and the wellbeing employees is a priority.

In the penultimate week of September, there was news of a rapid rise in COVID-19 cases – with the US with the most cases; oddly enough, there was no news on the how this superpower is going to handle the cases from a Squash angle.

Regardless, it is good to see Squash venues returning to some of a new normal and take part in the world’s healthiest sport in the world with no problems.

Come 2021, there is going to be talk about the 2022 Commonwealth Games – an event that is going to do wonders for the Squash provision in the great city of Birmingham.

To sum up, next month is World Squash Day and there is a lot of hope this event can help reinvigorate the interest of the sport once again, but with the angle, you can stay active with sport post lockdown.