Why? As it was a game changer, and a major boost to the country, plus could help drive participation of the sport – thus Kenya be the next emerging force in Squash. 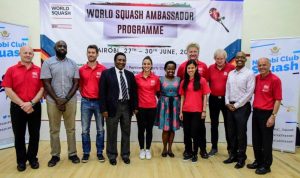 With Kenya it is one of the nineteen countries governed by the Squash Federation of Africa.

The most famous player from the country is Fran Marshall, who was born in England but raised in Kenya. Fran won the British Open Championship in 1961, and then the Scottish Open title in 1962, defeating Australia’s Heather McKay.

Squash provision for everyone from schools to private clubs

Kenya has a strong network of Squash clubs. The provision like that in any country – private owned club and managed by a committee. In addition, there are Squash courts in hotels; which is good for tourism.

GSB Kenya produced a video on Squash in Kenya as a news report on Kenya national television.

For the WSF Ambassador Programme, the prestigious Nairobi Club, the country’s premier country club, played host for the event. The venue has four Squash courts and is located in the Upper Hill Region north of the Central Business District of Nairobi – an ideal catchment for business professionals.

The locals watched Squash legends play in exhibition and practice games. For the young players, they had the opportunity to go on court with the legends of the sport.

But, if you want to trace back the first venue of where Squash was first played in Kenya – it was the Parklands Club. This eight court club was first club to have Squash courts when it came to the country in the 1950s and is renowned for producing national squash talent.

Upon reflection, you can compare this to any high-end health & sports club in the UK.

On the national and international competition stage

The Kenya Open is the only Men’s national competition, with a prize fund of $7,000. There also many local competitions sanctioned the Kenya Squash Rackets Association.

Even though she was born in England, she took part in 1981 Women’s Squash Team Championships, held in Canada.

Since 2006, they have taken part in Commonwealth Games, individual and team categories. In 2018, the country entered in two players for the tournament.

When you look at the excellent Squash provision in Kenya, it is evident that the country has the potential to host a Tier 1 PSA sanctioned tournament.

The ambassador event has served a platform to inspire the junior players on the grassroots Squash programmes.
Kenya could be one of those countries that could become a game changer of the sport. Moreover, could compete with the likes of Australia a serious competition for best of rest.