In our efforts to educate Squash players on technical skills in upping their game, we came across a crucial technique for winning in the D1 and D2 zone of the Squash court. 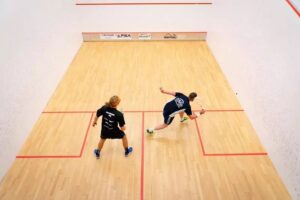 As we all know, Squash is a highly competitive sport (also a healthy sport), whether you are recreational or professional player – winning a tournament, whether it is an inter-club or top tier tournament, there is a subtle art to winning a game from playing in D1 or D2 zone. 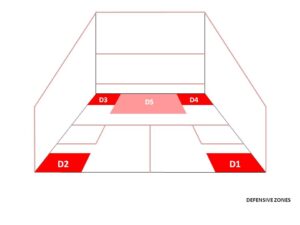 Following watching a video narrated by one of the most successful elite Squash coaches in Australia, he highlighted several playing strategies for Squash player can adopt when playing from within the D1 and D2 zone:

Role Reversal when playing in D1 or D2 Zone 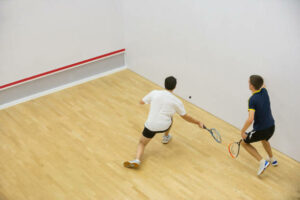 Squash players in action on squash court, back view.

This technique is the role reversal when teaching the player must defend when the player is in either the D1 or D2 Zone and is blind to the opponent.

It leaves the player asking – “where do you want to be by the time the opponent is about to hit the ball”? The player responds “on the T”.

Get the player to play a game and during the game when the player is in either the D1 or D2 Zone stop the play. Tell the player you refer to this back corner as the D2 Zone.

The player now realises that when positioned in either the D1 or D2 Zone to attain the T the player must hit the ball high and slow.

Two feeder routines when in D1 and D2 zones

The player has discovered that to attain the T when positioned in either the D1 or D2 Zone the player must hit the ball high and slow…. the player now needs to use the process of a playing routine of which encourages the player to defend.

In this method will assist the player to identify when they are in either the D1 or D2 Zone (and blind to the opponent) to hit the ball high and slow.

Implementation of the Strategy in D1 and D2 Zones 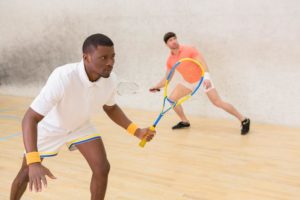 Before serving, you must prepare your mindset to:

Any of these components must be identified sequentially before selecting what shot to play, together as a player will become conscious in Squash.

Getting advantage for a match win

This works when the player positions in the D2 zone too using the same imagining method as used in playing D1 zone.

A Squash coach, teaching these routines will in the D1 and D2 Zones the player is now ready to practice the strategy during match play scenarios, such as “I am in the D1 zone (or D2 zone), I am blind to my opponent, I will hit the ball high and slow”.

It is essential that the player needs to continue practicing in matches until the player can consciously identify the zones and respond appropriately.

In any winning strategy in Squash, practice makes perfect thus, it is essential to do training activities that involve the D1 and D2 zone.

On the other hand, if you are a recreational player who competes in a club level tournament you could practice the D1 and D2 zone in your play against one of your team-mates or with the resident club coach, in a practice game.

Always remember, in order to be successful in Squash you always need practice serving, drills and much more to win.

Note, when it comes to down the nitty gritty of it your game can improve by doing some individual training and imagination of playing an intensive game against opponent, along with knowing what to do in any situation.

To sum up, if you only remember any of these strategies when you play, you will always be playing your opponent and the situation not the “correct” shot, this will lead you to play effective, winning squash.