From a young age, Hasnaat Farooqi has been interested in Squash, but who can blame him; he was born in the birthplace of Squash, along with his younger brother Zan, who also shares his passion for the sport too – together they are Harrow’s homegrown  Squash players. 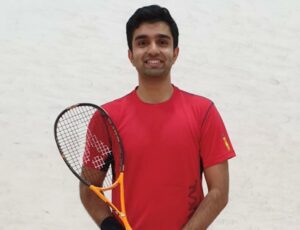 He attended school in Harrow, not very far from where the sport was discovered too; plus he has taken part in a number of local junior tournaments, outshone his peers along with many senior Squash players too – something many the young athletes would define as a sporting prodigy when they are taking in competitive sports and winning against senior competitors. 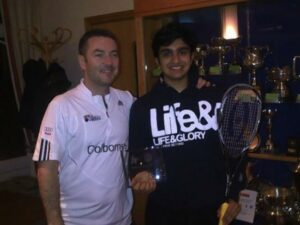 Like many Squash stars on the current pro-circuit, Hasnaat has accomplished a lot as a junior player – he was the County Champion for Hertfordshire County consecutively for 7 years holding all the titles u13(x1) u15(x2), u17(x2) and (u19x2) – a feat that not many have accomplished this distinguishes him amongst his peers.

He has also been part of the winning National club team champions beating Pontefract club, as part of the Berkhamsted Club in Hertfordshire. 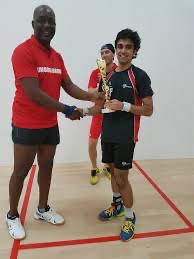 He won the Top Wimbledon Silver England tournament, where he managed to take out England’s top 4 players. In addition, he has taken part in and won many bronze events & other events, notably the Ryder Cup holder and so many other junior squash tournaments.

The pandemic halted Hassant’s squash activities; despite this, he has been working on plan B – a career in finance.

Recently, he graduated from the University of Westminster in London with a 1st in Finance (BSc) with Honours from the – a subject that he has a strong interest in, especially from a sports perspective, and this is something to go back to after the life of squash.

Throughout university, he played a few matches whilst he was studying full time at University (no squash at University, unfortunately). He did this to get used to the PSA circuit, so it was not a new experience once he was full-time on the circuit & to see if he really wanted to continue on this path.

In 2016, whilst at university, he took part in the Brit Open, and he beat the then top second USA player 3-1. This feat caught the attention of Harvard University (one of the world’s most prestigious universities), which offered Hasnaat an opportunity to study finance and even play Squash for them.

Hasnaat did not want to study there, choosing to stay in the UK and make a name for himself and be a role model for young people in Harrow.

Ironically, when it comes to doubles Squash, Hasnaat won a Doubles event held at Imperial University sponsored by Karakal – a feat that shows he can win in any capacity.

Gearing up for a return and enter the pro’s

As we, all know we had a very long Lockdown! Unfortunately, Hasnaat was not allowed to practice.

Nevertheless, having seen the restrictions lifted in indoor sports, Hasnaat recently resumed training & match play and showed no signs of neither player rustiness nor fatigue on the court. 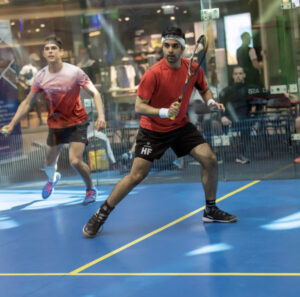 From his social media posts, he is working hard in London to improve & progress himself in this sport, in practicing his drills with friends and his family, – this shows that Squash is his passion!

Following the excellent 2021 Squash Summit held a few months ago, the newly appointed president of the World Squash Federation announced major plans to revive the sport in terms of boosting participation with more opportunities to access and play the sport.

However, in the context of future Squash talent, who have accomplished feats at a junior Squash level, we as a company reckon that Hasnaat is a great talent and deserves to be a part of the next generation of Squash players from the UK.

As a company, we are supporting him on his journey to becoming Harrow’s first Squash champion at a senior level, but to do this we are looking for partners to assist him in the journey.

If you are a company looking to back him in his journey to becoming Harrow’s first own global Squash star and World Champion in Squash, please email us at info@onyxsquash.org.uk to discuss or arrange a meeting with the future champ from Harrow.