For the central of England city, this tournament kicks off the beginning of great sporting time for one of the most culturally diverse places – as Birmingham won the bid to host the Commonwealth Games in 2022 – a multi-sport event in which Squash has a strong association with since 1998.

This year’s Dunlop British Junior Squash Open attracted over 600 junior squash players; with 220 from the UK and rest from four corners of the globe looking to make a name for themselves in one of premier England Squash sanctioned events to launch their careers to an international audience. In terms of coverage, the event was available watch online.

The Squash landscape in Birmingham

Choosing to host the tournament in the city was a brilliant idea, as the chosen venues for tournaments were split across four England Squash accredited 1st class facilities – the Edgbaston Priory Club, Solihull Arden Club, the University of Birmingham Sports & Fitness Centre, and West Warwickshire Sports Club.

Each of the venue have great Squash facilities, as well a strong grassroots squash development programme that is community driven.

KEY FACT: the University of Birmingham is one of the leading BUSA Squash teams

For the Edgbaston Priory Club, hosting a Squash event at their club shows the effort they make in promoting racquet sports, as the facility is host to the Women’s Tennis Association AEGON Classic Birmingham; hence, it would be good to see them hold Squash matches at the 2022 Commonwealth Games.

Future stars in the making and standout stars of 2018 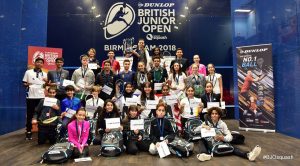 Throughout social media, there was a lot of talk about young players from parts of the UK, especially ones from the West Midlands and Warwickshire counties. However, it was great to hear about Dylan Roberts, 10, from Bexley making an appearance at the Dunlop British Junior Open.

There is a lot of talk about young players from India and Egypt; the former had four players reach the boys finals. For the first time in 16 years, there were two Brits in the final – Sam Todd (Boys U15) and Jonah Bryant (Boys U13) reached a final in their respective categories.  As a result, Todd beat Neel Joshi of India in the final, with Bryant winning his category, thus all jeers for England.

Meanwhile, in the female competition, the Azman sisters from Malaysia lead the way to reach the girls finals in the Under 13 and Under-15 categories; as a result, they won their respective matches.

To conclude having the British Junior Open in Birmingham in a way can be like a mini-Tournament of Champions (minus the big prize money), but have a great cultural impact on the area. It is fair to say that 2018 British Junior Squash Open will have lasting impact on the city from a sporting tourism perspective, as it will use this to promote a sporting legacy for young people from all sections of Birmingham.

However, at a grassroots level, local squash academies whether are at the tournament venues or based in the surrounding areas of the West Midlands – will look to promote Squash working in collaboration with Sports Development Officers as means get more to young people (plus seniors) and endeavour more widening participation engagement.