The Tournament of Champions is the only squash tournament that has a strong social impact on the local community, as well as attracting the top Squash pros to play in the richest Squash tournament in the US. 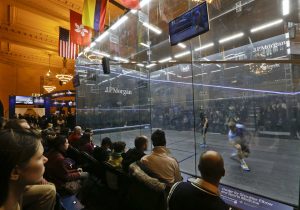 The 2018 tournament will be a 21st anniversary association with the venue the Grand Central Terminal and the Professional Squash Association World Series sanctioned event, from which the prize money is shared equally amongst the male and female participants.

History of the Tournament of Champions

The inaugural event was in 1930, and was known as the US Professional Championships; by 2001 saw the introduction of the women’s competition. In terms of entries, with the men’s category there has been a draw of 32 participants, from which the tournament is a part of the PSA World Series.

As for the women’s category, only 16 participants – this maybe half the men’s, but the promoters hope to attract more women’s players to the tournament.

The first 22 tournaments were won by local players, before the legendary Pakistani player Hashim Khan brought an end to the United States dominance in 1955. Khan would have to wait a further eight years to lift his second title, and that victory ushered in a 14-year period of dominance for his countrymen until Stuart Goldstein returned the title to US hands in 1978.

Over, the next decade and a half would see the title won by four nationalities with Canadians Clive Caldwell and Michael Desaulniers and Mexico’s Mario Sanchez joining winners from the United States and Jahangir Khan (6 time Squash World Champion) of Pakistan winning the crown between 1984-1985.

As for the Brits, Peter Nicol, Nick Matthew, James Willstrop, Linda Elriani, Laura Massaro and Alison Walters – have featured in the finals of the tournament.

A tournament with great community and broadcast value

With the Tournament of Champions, it is held in the metropolitan community of New York and is the only sporting event that brings people in the corporate world together to engage with one another, as well as support the urban squash development programs – Street Squash and City Squash.

In terms media coverage of the tournament is on SquashTV and digital channel Eurosport – from which the televised matches bring in a revenue of $40million (according to the PSA World Tour) from which players of 20 countries and 6 continents are represented by 100 men and women.

To sum up the JP Morgan Tournament of Champions is the like the ATP tennis tournament, which is held in December at the O2 Arena in North Greenwich.

Could something like this be done in the UK? Yes, but it would be a great debate on which UK city would host – Manchester, London or Birmingham. Oddly enough, there is the Canary Wharf Classic in March – but that is more of a corporate tournament.

Overall, squash competitions like the Tournament of Champions have a great community and business value, from which everyone benefits, hence the next generation of squash players will reap the rewards personally and professionally with monies distributed to keep the grassroots initiatives going – should Squash receive Olympic inclusion this will mean more credibility for the tournament.