Last month was 2017 the Allam British Squash Open, from which the impact was positive as it made headlines for the right reasons, notably as it was an all-British final comparison that compared it to Squash’s racquet cousin – Tennis high profile final at Wimbledon. 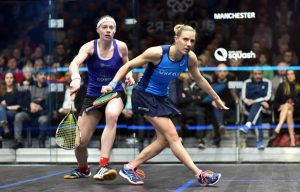 Battle of the Brits

The final was U.K. Squash no.1 & World no.2 Laura Massaro and fellow Brit Sarah-Jane Perry, one journalist at The Guardian drew a comparison to the Wimbledon tennis final, given it was all British final; the article was a fair comment and an excellent comparison to another racquet sport and great coverage for Squash that will boost the profile of the British players and their international counterparts.

Despite no YouTube Live coverage, the regular updates on social media were useful and even the content featured on BBC Sport got many Squash enthusiasts interested.

So why Wimbledon comparison? Well, it was the first time in 26 years of the British Squash Open, there was been an all-British final, hence you would think one of the major broadcasters would make news of this…..you would be wrong in thinking so.

There hasn’t been an all-British Wimbledon final in decades, in fact, Andy Murray was the first male to win at Wimbledon in 77 years in 2013, and he did so again in 2016.

Imagine, if were two Americans in the US Squash Open Final: the media would be enormous and there would be comparisons with other great US sporting finals or matches.

Looking at the two racquet cousins, Squash has produced more homegrown champions than Tennis but doesn’t have the same clout as Tennis in terms of prize money and Olympic inclusion. Whenever there is a female final at Wimbledon that features the Williams sisters, the press goes mad in coverage, but with Squash there was no such thing – only a short mention in the tabloids.

However, the impact of the 2017 all-British final will be talked about for years with hopes of another one, along with all British men’s final.

What next for British Squash?

The news of the British final should be a boost for the grassroots squash development and also be the catalyst to encourage more females of any background to take up Squash at their nearest Squash club, especially if there is a female-only fitness suite.

Furthermore, the comparisons between Squash and Tennis are great, as it shows that neither sport is a minority sport. The only wish Squash is it needs more PR to compete with Tennis in the form of Olympic inclusion!!

Oddly enough, British men’s No.1 Nick Matthew made headlines by donating his winnings from the Canary Wharf Squash Open to a young child suffering from a tumour, this story was featured on Sky News.

Overall, the success of Laura Massaro is great for the sport and like Nicol David, Laura is an inspiration to any future squash player plus a great ambassador to the sport; in addition worthy of a BBC Sports Personality nomination and OBE.