We all know Squash is a global sport, so in our mission to raise awareness among the masses, we have recruited Jean-Marie Besombi, as our first international ambassador; just like other Squash players alike he has managed to keep his skills going despite the pandemic. 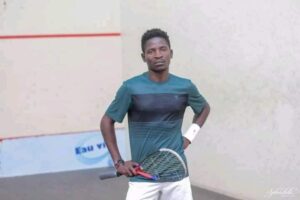 Jean-Marie is from Kinshasa, one of the largest cities in the Democratic Republic of the Congo, and has been playing Squash for over a decade.

He has been a part of the PSA for many years and has been one of the many few Squash professionals from Africa to have competed in the PSA-sanctioned Lagos International Squash Classic, in Nigeria in 2018.

From school lessons to local titles and international tournaments

Jean-Marie has always been interested in Squash, from a young age; in fact, his PE teacher was the first person, who Jean-Marie’s abilities in playing the sport, at school and encouraged him to continue to play the sport more.

In that he did.

Throughout Jean-Marie’s playing Squash career, he has taken part in several local and national Squash tournaments in Africa and achieved title success:

His win at the Kinshasa Squash Open made him a national hero and was highly publicised in Ouragan, a local newspaper in Kinshasa.

It was noted, how both Jean-Marie and Kazadi Mutombo, managed to beat a batch of 20 players to reach the final of the 16th edition of Kinshasa’s premier Squash tournament.

On an international level, in 2018 Jean-Marie took part in two of Africa’s high profile Squash tournaments, the “Nairobi Club Invitational Tournait” in Nairobi, Kenya, and Lagos International Squash Classic 2018 – both of which are highly popular with Squash enthusiasts in terms of sports tourism and drawing attention to the sport in Africa.

Despite not progressing further into these high-profile tournaments, Jean-Marie has certainly made a name for himself in Squash and the Congo – especially being a national champion who can play against international stars and show the world that Squash is very popular in Congo.

Since 2019, he has been on a training course at Parkview Squash Center in Johannesburg, South Africa, as a means to improve and maintain his skills in Squash under the coaching guidance of Simon Yoka.

In fact, he is training with the local youth team as means of giving back to the local community that has supported him over the years.

For us, this shows total dedication and most importantly a great way of maintaining interest in the sport too – especially if there are not many mentoring opportunities for young people by a Squash professional.

More awareness for the masses

Squash is going through a revival, following the pandemic in which an overwhelming number of inhuman issues were brought to the public’s attention, notably BLM and other matters.

In the context of talented Squash players who deserve to be part of it, Jean-Marie is another one, he deserves a chance to take part in major Squash tournaments overseas – in order to be strong a role model to children from African and Caribbean backgrounds that they can participate Squash and not be put off by racial discrimination or prejudice.

What makes Jean-Marie a talented Squash star is his persistence in playing the sport whatever his situation.

As a sports company, we are very honoured to have Jean-Marie part of our international associate and work in partnership with us to raise the profile of the sport.