With all the talk about Squash and the Youth Olympics 2018 – it seems London Youth Games and Squash make for a great association in promoting grassroots squash development.

Last month was the 40th London Youth Games held at the Crystal Palace National Sports Centre, it came down to final between the London Borough of Bromley and London Borough of Wandsworth in the boys Squash final, with Bromley is winning it was certainly good for the borough.

However, the main talk was about a talented young woman from Kingston who scooped gold – topping her father’s childhood success by scooping gold in the girls squash category at the London Youth Games.

Clara Woodbridge, 17 (below, with trophy), helped the London Borough of Kingston Girls’ squash team conquer Bromley 2-1, to take home the girls squash team title, in the same games final. Ironically, her father, Andrew won silver in the boys’ squash event at the very first London Youth Games in 1977 – which officially opened by the Queen as part the Sliver Jubilee celebrations. 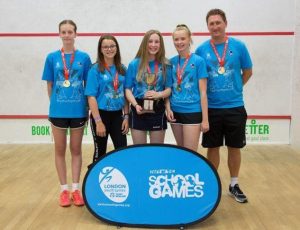 Just like the CASA Junior Championship, the London Youth Games are a testament to all grassroots sports development programs and for Squash, it is a good for young people from different borough to compete against each other.

Looking at the junior squash programs across London each one is unique and delivers strong social value in keeping young people active. Hopefully one day, we have one of our pupils – take in the London Youth Games.

Overall, the event brings about greater community cohesion using sport, including squash as a tool to unite London.