Billed as the Squash’s World Cup, the 2017 Men’s World Team Squash Championship will be remembered as a tournament of firsts as the competition saw a contender in the world of Squash.

Team Jamaica was entering their first global squash tournament and were a part of the Pan-American confederation group. This was truly another historical sporting moment for the country and plus they were first Caribbean island to participate in Squash’s equivalent of the FIFA World Cup.

Held every two years, the 2017 edition marked the 50th anniversary of the first competition. The first tournament was held in Melbourne, Australia and since 1967 to date, the country has won the most medals at the World Team Squash Championships.

By the 1979, saw the introduction of the Women’s World Team Squash Championships and the inaugural tournament was held in Birmingham. The Great Britain Ladies Team won the tournament, with Australia finished runner-up and Ireland third taking place (to date the country’s world squash success to date).

To date both Australia and England are most successful teams in men’s and women’s categories.

Jamaica take on the World 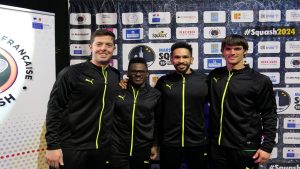 On a sporting front, the most memorable sporting events in which Jamaica has made their debut were 1998 FIFA World Cup and the 1988 Winter Olympics; thus, the World Team Squash Championships were another historic moment for the country.

For Jamaican Squash Team consisted of a mix of experience in the form Chris Binnie and Lewis Walters, both of whom have played in international tournaments; and upcoming stars Bruce Burrowes and Dave Schwier.

Seeded at 21 and played against Germany and Scotland in the group stage of the competition, Jamaica took 22nd place ahead of Iraq and Austria. Despite this, the team can use this experience to prepare for another world squash competition. 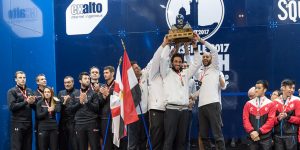 The finals were between Egypt and England, both teams were lead by top players – Marwan El Shorbagy and Nick Matthew.

As a result, Egypt won, for them the World Team Squash Championships rounded up a successful year for the country as they already won the Women’s, seniors, junior, and individual WSF, and PSA world titles. They only missed out on a World Junior team title.

Even though the Jamaican Squash did not make it out to the group stages, but they take solace that their appearance will inspire young Squash players at a grassroots level and even inspire them to enter global squash tournaments.

Overall, it would be nice to see Chris Binnie and Lewis Walters, participate in British Squash Open Championships just to gain more exposure for Jamaica Squash. Even better, it would be good to see the junior squash team play in a WSF sanctioned tournament against nations such as Australia, England, and Egypt – perhaps take part in the British Junior Open Championships.

Squash can be the new passion for the people of Jamaica, like cricket and athletics have done, thus with a substantial financial backing they could be the no.1 Caribbean Squash team.