In the last few years, Squash in the UK has seen a strong resurgence in the growth of the sport, notably success in individual competitions at a senior level, plus this year’s success at the World University Championships in Birmingham.

As for popularity of sport, there has been a lot news coverage and new channels for both old new fans to engage with the progress of stars of UK Squash. 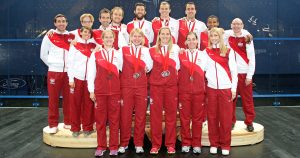 Let’s not forget the UK has a strong network of grassroot programmes across key cities and home counties, hence each child has an grand opportunity to become a Squash player. Furthermore, most venues are operated by commercial and public management teams.

The next king of UK Squash

Following the retirement of Nick Matthew this year, we ask who is the next star of men’s Squash.

Let’s not forget the ladies game, so far the ladies of UK Squash are making serious progress and giving female competitors from the likes of Egypt and Malaysia some serious competition.

Ladies Squash on the rise

Both Laura Massaro and Sarah-Jane Perry is in the top 10 of the women’s PSA rankings, a feat that has been a long time coming – but the one player from the UK they have watch out for is Tesani Evans of Wales, who done at the most recent Commonwealth Games in Australia.

Overall, with campaigns such as This Girl Can, an initiative to get more young women into sport – Squash in the UK could see strong influx of young women taking up the sport because of the strong influence of Laura and Sarah-Jane.

Following the debacle of Squash courts being removed to make way for fitness fads, perhaps it is time UK Squash follow the example as is done in the US – Squash on Fire.

Given the state of high street with shops closing down, Squash can fill this gap with a similar concept that is attracting more people to the sport – add in a retail section and a café, it’s pretty much a win win for both parties.

Outdoor Squash, the UK has a lot of parks – so how about few public Squash courts in certain areas of the country. This would be a great way of getting young people to play the sport, especially if there was commercial and community partnership.

Also, the more courts available could see a influx in participation of the sport with more adults looking to take it up as a activity to keeping healthy.

When England Squash announced the development of Performance Hubs, in order nurture the next generation of Squash – this shows that governing is very serious about building a strong development of talent to compete at all levels of the sport.

Just like other sports, such as formula one and football; Squash is collaborating with the grassroots community to produce the next Nick Matthew or Laura Massora.

It’s a shame there is no commercial partner attached to it, like David Lloyd Leisure and Virgin Active has with the Lawn Tennis Association.

To conclude, Squash is becoming popular again and it is good to see that England is going from strength to strength with new developments to boost participation. All what is needed is extensive coverage on UK screens to give it value.

As an organisation, we hope to make a positive contribution in bringing Squash to the forefront of the UK sporting landscape.